Do we need to cover ‘atypical’ community acquired pneumonia?

Most antibiotic guidelines1-3 , including the HNELHD Community Acquired Pneumonia (CAP) guideline, suggest empirically treating community acquired pneumonia (CAP) with a macrolide or tetracycline to cover ‘atypical’ organisms. But is this necessary and what should be our approach?

Beta-lactam monotherapy was non-inferior to combination therapy for non-ICU patients in the CAP-START trial4. However, a more recent meta-analysis (based on relatively poor quality studies) showed a small but significant difference (15%) favouring the addition of atypical cover for the endpoint ‘clinical failure’5. There were no differences in mortality, microbiological failure and adverse effects, and acquired resistance due to antibiotic exposure was not analysed. However, there was a significant benefit in patients with confirmed Legionella. Whether this translates to the ambulatory setting is unclear and estimates from recent data suggest that around 14% of primary care visits for respiratory infections are due to ‘atypical’ bacteria including 3.4% due to Legionella6.

Although data for the optimal treatment of Legionella are lacking, azithromycin remains suitable for severe disease and tetracyclines have good activity against the organism. Hospitalised patients (HNELHD) with severe CAP are given benzylpenicillin+gentamicin +azithromycin whilst moderate CAP inpatients are given benpen+doxycycline ; ‘atypical’ cover is included as there are no specific clinical or radiological predictors of such infections.  Neither azithromycin or doxycycline are suitable for monotherapy in hospitalised patients as resistance levels for both are around 15-17% for local Streptococcus pneumoniae isolates – hospitalised patients with CAP should always get a betalactam for pneumococcal cover!  Amoxicillin OR doxycycline monotherapy is suitable for outpatient (mild) cases of CAP.

For Legionella, what are the historical clues and which ones are most reliable? Here are two recent cases.

Case one: a 42 yo man with severe alcohol dependence and undiagnosed type 2 diabetes was admitted with fever, dyspnoea and malaise for a week. He was too unwell to drink alcohol and had not spent time in a hot tub or spa bath (nor had he been to a Legionnaires’ conference!). He was hypoxic and hyponatraemia, requiring intensive care support – hi-flow oxygen. His chest X-ray is shown below. He was treated empirically with ceftriaxone and azithromycin and returned a positive urinary antigen for Legionella pneumophila type 1 on the basis of which ceftriaxone was stopped. Blood cultures were negative. He improved with a 7 day course of azithromycin. Unfortunately, he had an inferior ST elevation myocardial infarction a month later which is an increasingly recognised association following severe sepsis. 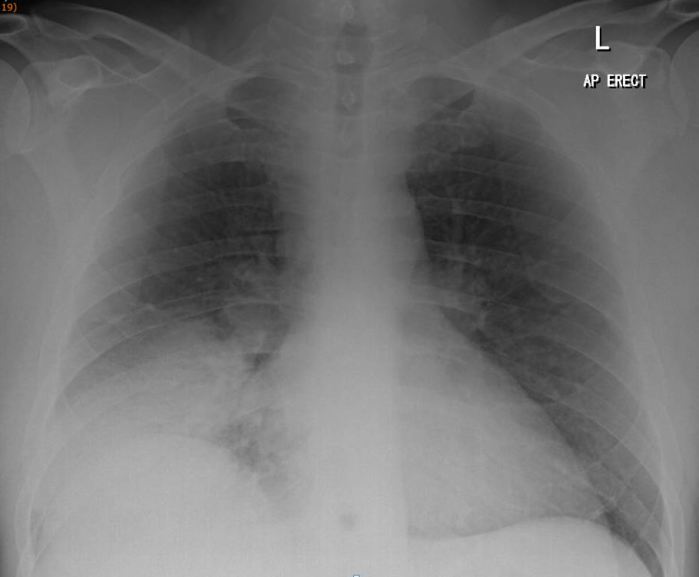 Case two:  a 72 yo man who was previously well was admitted with fever and increasing dyspnoea over 5 days. He had a very mild elevation of his AST and ALT and a CRP of 300. Blood cultures and urinary antigens were negative. His chest X-ray is presented below. On further questioning, he admitted to using a significant amount of potting mix to create a garden over the previous two weeks and had not used a mask. On the basis of this, his benzylpenicillin was ceased and he was continued on azithromycin monotherapy for 5 days. His Legionella longbeachae titre seroconverted from negative on admission to 320 ten days later, confirming the diagnosis.

Both of these patients demonstrate classic risk factors for Legionellosis: alcohol dependence and diabetes in the pneumophila case and the use of potting mix in the longbeachae case which should be sought when considering an empiric antibiotic regimen. Urinary antigen testing for Legionella pneumophila has a rapid turn-around time and a sensitivity of over 90% for Lp1 whilst for other types, diagnosis depends on direct molecular detection (PCR) from a sputum or endotracheal sample. Seroconversion may be slow to occur and collection of the convalescent specimen is recommended to be delayed to 4 weeks at least7.